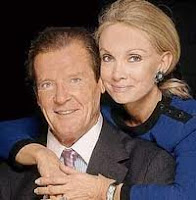 Lady Kristina Moore - also or previously known as 'Kiki' is showing that the wife of former James Bond star Roger Moore may be shaken but not stirred over the Daily Mail's decision to publish a story about her relationships back in the 1950's. Unimpressed by the paper's version of events - which she says are defamatory - Mrs Bond has issued High Court proceedings and is claiming aggravated damages over an article that claimed she had been 'knocking around' the French riviera in the 1950's and had an affair with former 'playboy' and journalist Taki Theodoracopulos.

It would seem that the reference to a Kiki in Taki's life was a reference to someone else and that Tiki had confirmed the same to the Mail. What is being claimed is aggravating in this case is the fact the paper didn't bother to check the facts or give a right of reply to Lady Moore.

The fact there might have been a Kiki in Taki's life does not negate the defamatory association with Lady Moore as being identified or associated as the Kiki in question. If the paper has published an untrue allegation (about a Kiki who could reasonably be taken to be Lady Moore) and this publication could tarnish the reputation then in absence of any defence - which has not been forthcoming and is not readily obvious here - then it seems that it has defamed.

Aside from anything else Mediabeak cannot really see a big commercial interest in this story in the first place so if it has mixed Kikis and not got some magic defence lined up the Mail might as well move to secure a quick settlement and undertaking not to repeat the story/allegations.

More on this from Press Gazette
Posted by Mediabeak at 2:24 pm