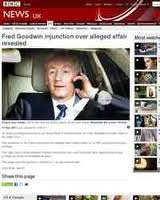 Fair play to The Sun (+ of course legal team) who continue to put pressure on the High Court - or as it happens Mr Justice Tugendhat - to remove the rest of the discredited superinjunction that sought to cover up Fred the Bed, the Shred, the Banker, Goodwin's affair with a senior Royal Bank of Scotland (RBS) colleague.

Having secured a partial lifting of the order and been encouraged by support via social media (not just Twitter - arguments re that medium and its responsibilities having been exhausted for now)The Sun's legal team returned to court last week and again today to press for what remains of the injunction to be lifted.

Fred the bed's bonking banker - party to the injunction - has already moved to seek contempt proceedings for being all but outed through a report in the Daily Mail but that has not deterred - and should not deter - The Sun in its efforts to allow the full truth to come out.

In relation to Fred Goodwin he has already been outed and is in exile over his trashing of RBS so his interests in the injunction are arguably spent but in relation to his former colleague - who has (despite the profile in the Daily Mail and anyone reasonably proficient at online research being able to get a list of if not 'the' likely suspect)still, thanks to the injunction maintained her privacy and not yet been publicly outed - so is that argument enough for Mr Justice Tugendhat to preserve the elements of the injunction that protect details of the relationship and her? - arguably yes.

While The Sun is right to push on the futility of the injunction in relation to Fred Goodwin, from a strictly legal point of view that does not necesarily extinghish the protection the same injunction was designed to and should afford his ******* of ******** at RBS. One of the threads in the current argument for lifting the rest of the injunction is that Fred's having an affair at the time when he was expanding his banking empire in the face of financial market meltdown suggests his eyes were on the bed rather than the boardroom and as such this is something that could be extrapolated as being in the public interest to know about and as such his bedroom activities become relevant to his boardroom decisions - and so enters the public interest.

But the public interest attaches to the actions of Fred Goodwin and - to be fair and reflective of the direction privacy law is moving in - the outing of his mistress and details of what they got up to are (privacy aside) not relevant to the public interest argument namely, he was bonking a banker and distracted from his duties to run his bank.

So to restate the position in light of the current shape of privacy law: Fred was accountable to shareholders re the running of the bank and its exposure to bad debt and the financial market turmoil as well as to the wider public - who had an interest in him as head of what was a mega-bank that happily took in the public's money and investments - so to the extent he might have a reasonable expectation of privacy there was also a strong public interest argument in relation to his character and management. It is, Mediabeak would suggest, totally right that he should have been outed and be publicly accountable - in his position and with the monies (indirectly but ultimately) entrusted to him he deserves to be so. While it is right he should take the rap, his indiscretions and accountability do not automatically extend to his mistress. What she did may have been morally wrong but it was - in relation to her, private. The question arises whether when someone such as she engages in an affair with someone such as Fred Goodwin they realise their risk of being exposed is greater and as such their right to privacy under threat? arguably yes but the fact of threat does not translate into a right to have thier privacy invaded.

Endgame: Fred deserves what he gets but if Mr Justice Tugendhat decides that the unjunction should be upheld in relation to the mystery banker then that is an entirely logical and rational upholding of the law as it stands.

So The Sun is right to keep the pressure up as we need to get a ruling and some clarity which hopefully will be in line with the approach and rationale Mediabeak has outlined above.
Posted by Mediabeak at 3:41 pm No comments:

Freedom to Tweet – human right or misuse of medium?

Hot on the heels of Giggsy being exposed (according to the Sunday Times apparently by a banker rather than a journo) and the shredding of Fred Goodwin’s superinjunction which the Sun has been seeking to finish off in the High Court today), privacy pundits have again been in uproar over an anonymous tweeter who has tweeted information about a further super or not so super injunctions (helpfully supplying links to documents and related media reports).

The number of followers signing up to the new rogue tweeter had exceeded the 800 mark at last count while the number of injunctions that have been listed over the past 48 hours stands at 14 - which matches the 12 to which the Daily Star made reference recently - Mediabeak notes that this anonymous tweeter – noted for displaying a profile picture of a mask – is using the same sort of mask as a blogger listing those considered to be in the frame for being the banker Fred Goodwin bedded…(with Schilling’s on the warpath I will not be supplying the links!).

The latest lot of links and claims to be uploaded onto the twittersphere has sparked calls (notably by claimant lawyers) for the courts to take action over what the Lord Chief Justice referred to the other week a ‘misuse of modern technology’. He considered Twitter to be completely ‘out of control’ but is it?

Twitter is merely a platform and not the messenger so should it be subject to legal grim reaping? Having been threatened with legal action over the tweets that are alleged to have outed Giggs over his affair, Twitter has already responded reservedly saying it will comply with legal orders (but will inform its tweeters if it has to hand over their details) however it will not proactively seek to serve up its users and assist claimant lawyers with fishing expeditions to find a tweeting scapegoat.

Legal action over the Giggs Twittathon could, if it proceeds, show how effective or futile such a threat or remedy it is – can one really pursue over 1,000 tweeters for re-tweeting something that had been put into the public domain by an MP in Parliament? Would the individuals tweeting really know about the terms of the injunction their tweets are alleged to have breached? In the minutes to hours after Gigg’s naming in Parliament, various media gradually became brave enough to risk it –whether they thought qualified privilege would cover them or that there is safety in numbers remains untested as yet.

There are however limits to being untouchable on Twitter. Last week South Tyneside Council was able to force disclosure of Twitter accounts by taking action in the US (Californian) courts which have jurisdiction over Twitter. The merits of that action and its outcome remain in question and to be seen.

Mediabeak suggests that the Twittersphere is in fact no different to other forms of media and social media. Yes there is and ought to be the right to freedom of expression and imparting information (consistent with Art.10 European Convention rights and US First Amendment rights) but where that which is tweeted is libelous, invasive of privacy, offensive or illegal then the tweeting and those publishing such tweets should not be above or shielded from proper legal process.

Twitter is not the publisher as some have suggested but is more akin to an ISP of websites or blogs – its responsibility is to comply with legal orders where its users have fallen foul of the law and legal action requires Twitter to comply with an order. If what has been tweeted is sufficiently in breach of or invasive of a celebrity’s (or any person’s) rights then it will be subject to the same checks and balances that exist under current legal process and the new privacy law – is the reasonable expectation of privacy of the person(s) being tweeted about such that it should trump the tweeter’s competing right to freedom of expression? – the answer lies in the public interest element and how the courts perceive that.

Two further issues arise in relation to Twitter:
1: When is something in the public domain and what is the position of re-tweets?
2: Pre-publication disclosure and injunctive action (such as Max Mosely and others dream of) are a pipe dream given the size and global reach of users whose tweets cannot be predicted.

What is not readily clear for twitter users (who are after all not news editors or required to be versed in – or indeed bound by – regulatory codes of conduct) is that they are not allowed to tweet something just because it is in the public domain or Twittersphere (who says so? and how is it binding on them). Would re-tweeting be treated the same as repetition/republication when it comes to libel? – logically one could argue yes but again, is this enforceable across Twitter? – the current cases may provide an answer.