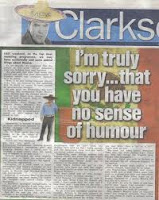 Media regulator Ofcom has decided that the remarks made about Mexicans on the hit BBC TV show Top Gear were not in breach of the Broadcast Code.

As previously reported on Mediabeak, presenters on Top Gear cause outrage over their comments about Mexicans during a programme broadcast in January this year.

Presenter Richard Hammond had lined up the Mexican mockery by stating:
“Why would you want a Mexican car? Cos cars reflect national characteristics, don‟t they? So German cars are very well built and ruthlessly efficient, Italian cars are a bit flamboyant and quick – Mexican cars are just going to be a lazy, feckless, flatulent oaf with a moustache, leaning against a fence, asleep, looking at a cactus, with a blanket with a hole in the middle on as a coat.”

There then followed dialoge between him and Jeremy Clarkson:
Hammond: “I‟m sorry but just imagine waking up and remembering you‟re Mexican. „Oh no ...”
Clarkson: “It‟d be brilliant, it‟d be brilliant because you could just go straight back to sleep again. „Aaah, I‟m a Mexican ...‟
Hammond: “... that‟s all I‟m going to do all day ...”
Clarkson: “That‟s why we‟re not going to get any complaints about this – cos the Mexican Embassy, the Ambassador‟s going to be sitting there with a remote control like this [slumps in seat and snores]. They won‟t complain. It‟s fine.”

As it happened 157 viewers and the Mexican ambassador did complain about these seemingly offensive remarks which were potentially in breach of Clause 2.3 of the Ofcom Broadcast Code which states: “In applying generally accepted standards broadcasters must ensure that material which may cause offence is justified by the context”

and ruled that the programme and comments had therefore not breached the code.

Mediabeak considers that Ofcom could reasonably arrive at their decision in relation to the Code as there is the broad and grey area of interpretation and context which allows - as was the case here - for the regulator to take account of the fact that the style and content of the programme is one of mockery, contempt and arguably cheap jokes. The question for the viewer and regulator however is this - just because we are told that a programme may contain offensive material and be used to certain presenters and programmes having a certain type of humour and making offensive remarks, does this negate the offensive of the remarks in relation to the application of the broadcast code or the viewer? while one has to preserve the right of programmes to push the boundaries, express themselves and be satirical, this should not be at the expense of competing rights to respect and not to be ridiculed or satirised. In this case it is probably the right decision based on the context and content BUT Mediabeak thinks that this may nevertheless send out the wrong signals that this sort of comment is acceptable just because the programme it is broadcast on is seen as being 'edgy' or 'controversial'. Ultimately the duty of the regulator and broadcaster is to the viewer and this needs to be considered and balance against the ratings that some controverial comment or quip may serve to boost.

More on the Top Gear decision from MediaGuardian
Posted by Mediabeak at 2:35 pm