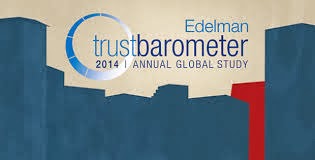 The 14th Edelman Trust Barometer was unveiled to the great and good at Davos this week – as well as to the rest of us.

The 2014 Edelman Trust Barometer revealed that the biggest decline was trust in government and business. While business trust levels remained largely flat, it was the ‘decimation in trust’ in government that led to a gap of 20 or more points in the majority of the 27 countries included in the survey. While business trust leveled at 58%, the report showed that trust in government hit an historic low of just 44% and thus retaining the crown of least trusted institution for the third year running.

While both government and business have been quick to give media a bashing and point to its failings and excesses, while trust in the media showed a slight decline back down to 2010 levels (decreasing five percentage points globally to 52 percent). The report showed that “Nearly 80 percent of the countries surveyed reported trusting media less compared to last year. However, there was a slight uptick in trust in all media sources including online search engines (65 percent), traditional media (65 percent), hybrid media (54 percent), social media (47 percent) and owned media (45 percent)”.

In terms of trust in UK media, this fell back slightly to 41%, after reaching 47% in 2013 but this is still a significant improvement after the dramatic drop to 22% on the back of the phone hacking revelations that emerged in 2011. Given that the actual hackgate trial is taking place and we have seen Savillegate at the BBC and now further criminal proceedings currently underway in relation to others from that era, the overall level of trust in media is still ahead of what it was during the five years between 2007 and 2012. What is interesting that in terms of the public’s trust in UK media by category, traditional media remains the most trusted, at 61%, ahead of search engines, at 51%, online news and blogs, at 47% and then social media, at 30% with owned commercial media trailing at 28% (the latter is probably also reflective of general business mistrust).

As a global snapshot this provides a worthwhile read: Full report site and links
Posted by Mediabeak at 2:44 pm